Today our district media specialists and paraprofessionals took part in an all day workshop on positivity. The training was based on The Happiness Advantage: The Orange Frog Parable by Shawn Achor. Shawn, a former Harvard researcher, has focused much of his work on positive psychology. He and his staff travel around the world speaking and training on positivity in the workplace.

As our trainer Devin Hughes explained today, happiness is a choice. The Orange Frog story is a parable about the effect that an individual with a positive attitude can have on a workplace. How anyone and everyone chooses to view and react to situations affects both ourselves and those around us.

Research has proven that our mindset matters, and realizing and remembering this fact is important to maintaining a healthy and happy work environment. Read more details about the parable here.

Besides the school principal and perhaps the front office staff, very few other staff in a school interact with as many different employees and students as the media staff do. Media staff in our schools are often the first point of contact for many--staff, students, and parents--whether it is a problem with technology or a research question. Therefore, these individuals have a lot of influence on the overall attitude and school culture. If they choose to interact with positivity, it will have a direct correlation and effect on the climate of the school.

The workshop was a great reminder of this fact and provided staff with a number of ways to remember that what they THINK and what they DO matter. Staff learned how to lead with positive results and nurture habits which result in an increase in productivity and happiness. (Watch the author's TED Talk below at 11 minutes to hear what these habits are.) This, in turn, has a “ripple effect” that touches others around them. I’m excited to see the effects of this work and how it impacts the environment of our media centers at each school!


Why Can’t We All Be Happy at Work? Although scientific support for the bene!ts of happiness is mounting, creating a happy and engaged culture requires a new kind of organizational learning.

Broadcasting Happiness: The Science of Igniting and Sustaining Positive Change 75% of job success can be predicted from a person’s overall work optimism, positive engagement, and support provision.

Posted by Dave Eisenmann at 9:45 PM No comments:

The Mindset of Innovation: 5 Behaviors for Accelerating Breakthroughs

One of the trainings I was part of in the past few weeks was led by the Brave New Workshop founder, John Sweeny, and his staff. John has written a book on innovation entitled The Innovative Mindset: 5 Behaviors for Accelerating Breakthroughs. The training was very unique because it was all based on activities involving improv, which is likely not the first thing that comes to mind for many people when hearing about an innovation training. It was a very innovative training on innovation.

Through a day of numerous fun activities and exercises, the staff helped us to think differently, realize the self-imposed constraints we put on our own ideas and those of others, and reflect on how this affects our work and innovation overall. In improv, nothing is planned and you need to invent and react in the moment. This is often true for innovating, too. Sweeny identifies five behaviors that accelerate breakthroughs in innovation:
You can learn more about the book and innovation training on Sweeny's website, which also has some videos segements of the presentation.

Posted by Dave Eisenmann at 12:12 AM No comments:

Systematic Innovation: The Top 4 of 40 Inventive Principles to Solve Problems

Last week at our annual administrative retreat, we learned about Systematic Innovation and the 40 Inventive Principles. Our speaker was Darrell Mann, a former engineer who is now a professor, speaker, and founder of Systemic Innovation, Inc., working with companies around the world helping them innovate.

Mann explained that back in the 1940s during the Cold War, the Russians analyzed patents from the United States in an effort to determine whether there was a pattern to invention. The program was called TRIZ, which translates to the "theory of the resolution of invention-related tasks"  as detailed in Wikipedia.  TRIZ researchers discovered that problem solving and innovation does actually fit a pattern and the thinking involved to create the innovation fits into one of forty possible patterns.

Some of the forty principles are used more frequently than others, and Mann explained that four of the methods solve 80% of the problems. So starting with a focus on these techniques can help us get to a solution sooner. The top four Inventive Principles are:

Mann's company has a software program that allows you to select the attributes of the problem for which you are solving and the program identifies the top principles that will most likely solve your problem. He bases this on a database of past solutions that have yielded millions of data points.

In addition to teaching us about the Inventive Principles, one other helpful exercise we did was to identify an "Ideal Statement" and then make an extensive list of all the reasons it couldn't happen; the "Yes, but..." reasons. We then cross referenced the relationships between each of these "Yes, but..." perceptions and mapped them out visually, making a concept map/flow chart. This allowed us quickly see the most important problem that each "Yes, but..." statement connected to as well as identify cycles/loops and collector issues. Mann explained that successful innovation identifies walls/barriers and breaks them down rather than working around them.

According to Mann, 98% of all innovations fail. By identifying the biggest problems and tackling them head on using one or more of the Inventive Principles, our likelihood for success increases. "Run towards problems and you will find the real issue to be solved." Great advice for business, education, and life!
Posted by Dave Eisenmann at 10:49 AM No comments:

Last week I decided to post something on Facebook after 220 days of not using it. I decided to end my fast after relatives at a family reunion asked when I was going to post something. I realized that in my efforts to cut back on social media, I had actually cut off a connection with numerous people. I wasn't aware of important events that had happened in their lives, either. I believe there has to be a way to keep things more balanced.

After doing the math I was shocked to learn just how much time on Facebook added up: not using it for the past 220 days multiplied by 5 minutes/day (which I think is a good estimated average) totals over 18 hours over the past seven months. That is a lot of time! Annually, 5 minutes/day adds up to 30 hours.

I haven't figured out how I want to proceed from this point forward for sure. I will probably post a few times a year to stay in touch and limit the times I check Facebook, maybe just to Fridays since that alliteration seems like something easy to remember. I know I definitely want to limit how much time I spend looking at it and don't want to be on social media instead of spending time with family and friends face to face. I also know I need to be careful that the time I gain by not being on Facebook doesn't just get consumed by some other Internet rabbit hole. As Demetri Martin illustrates, the Internet can take quickly lead you away from productivity.

So I don't want to let it become too time consuming but still want to be able to keep up with major events happening in the lives of friends and family. Five minutes times 52 weeks adds up to 4.5 hours annually. That sounds more balanced to me! Five minute Facebook Fridays...even more alliteration.

I'm certainly not the first person to take a Facebook Fast. A number of people who continue to try similar breaks from social media and I hope the trend continues. Check out #FacebookFast and #SocialMediaFast for some additional examples. I'm always interested in learning more tips for maintaining a healthy balance with social media. If you have ideas, please let me know.

Posted by Dave Eisenmann at 10:50 PM No comments: 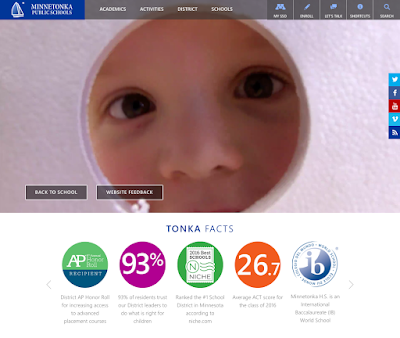 Last week Minnetonka launch a new district website, and it looks awesome! Our online presence was overdue for a facelift; we last launched a new website in 2012. Our new website is in Finalsite. The new website incorporates the latest features that viewers in 2016 have come to expect in web-based content: video, images, infographics and interactive feeds with social media. I love the homepage background video that gives visitors an overview of many of the great things happening in our schools. (This video is not visible to mobile visitors.)

Internet Archive's WayBack Machine shows the changes in our website over the years (pictured below). Scrolling through screenshots of our home pages over the years, even with some of the images missing, is a trip down memory lane and a fun visual history lesson of the internet. So much has changed in what is possible with web technology and content management systems over the past two decades since I was teaching my fourth graders basic HTML. (See How Long is Stuff Really Out There? My Students' 1995 Digital Footprint.)


The work on this project began last winter when our Communications and Technology departments began planning. A website redesign committee was formed and met to discuss what we needed in a new website. The committee included staff from the Communications, Technology, Instructional Technology, Athletic and Student Accounting departments as well as teachers, students and principals. We discussed what changes we wanted to see in a new website and reviewed our current structure of menus and pages.

We also conducted a public survey to evaluate what people liked (and did not like) about our website. 1,096 parents, students and staff responded to the survey. Along with that data, we looked at analytics on our most frequently visited pages to determine what the most popular pages were so that we could make sure they are detailed and easy to navigate to on the new site. Finally, the committee researched and evaluated school websites from around the world and listed what we liked best from each.

In February we reviewed proposals from vendors and selected Finalsite. After this decision the real work began. Our Communications staff moved and edited over 1,200 pages of content from our old site to the new one. Take time to look through our new website. We welcome your feedback!


Posted by Dave Eisenmann at 12:12 AM No comments: