Behind the Code: Using Spheros in Middle School for Deeper Learning

We continue to look for opportunities to provide our students with experiences coding. Recently seventh grade students at both of our middle schools had the opportunity in our gifted and talented program to work with Spheros. These devices are much more than round robots that can be controlled remotely through an app. They have a number of features that really allow students to learn and practice complex coding within another separate app. 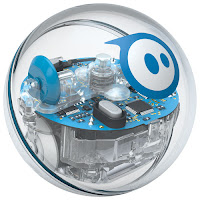 Students can begin coding with Spheros using blocks that can be dragged and connected in order to program the robot to move around with commands such as turn, move forward, etc. Within these various commands there are options for the number of degrees to turn or how far forward to roll in time or distance. In addition to this block coding, students can also directly edit and type in code as JavaScript text. Students can also switch between the two to see the code behind the blocks they have compiled. One of the teachers, Deb , at Minnetonka Middle School East, explained that this was a great differentiator for students--it allowed those who were fairly new to coding to get comfortable with it and allowed others with more experience and knowledge, as well as seeking a greater challenge, to work directly with JavaScript.

The teachers had the students program their Spheros to move through mazes, which proved to be more complex than students initially realized. They quickly learned they had to factor in variables like uneven floors, initial starting location and angle, and even debris on the floor that would change the Sphero’s trajectory. Students also programmed their Sphero to paint a picture (see the time lapse video above made by Andrea Hoffmann) and held Sphero Olympics with a slalom course and curling. Adding even more complexity, students learned Morse Code and programmed their Spheros to display messages through the blinking links in Morse Code, then read one another's messages. The complete outline for the nine day unit is below.

Deb explained that she found this project to be so much fun for her students that it really motivated her to do all the extra work learning about coding and Spheros herself as well as put in the additional preparation time needed for the activities. “It was one of the best things I’ve done in teaching!” she said. She came up with a number of workflow strategies which were important to ensure successful activity results. Deb plans to continue to explore new activities to include in the unit and introduce formal instruction in text coding in the future. She explained that they will need to address redundancy that may occur in regular courses as more and more middle school teachers begin using the Spheros.

At Minnetonka Middle School West, teacher Margaret McDonald at Minnetonka Middle School West also found that her students really enjoyed the coding activities with Spheros. One of her students told me it was his favorite activity of the class this year. He liked all the hands on activities using the Spheros and seeing the actual results of the coding.

Students have further opportunities to learn coding in middle school, including using Apple’s Swift program on their iPads. Students also use LEGO’s NXT robots as well as a 3D printer (MakerBot) with Fusion 360. Elective classes in eighth grade include Advanced Robotics using EV3s and a Computer Science class in which students learn Java and HTML. These elective options continue at our high school as well.

Day 7  Sphero Olympics – Curling: Working in teams, Code the bot to land in the circle, receive points offensive and defensive knock opponents out of circle.

Day 9  Sphero Art:  Jackson Pollack and Art Activity – make a mural using paint and the Sphero with or without the nubby Sphero cover.

Related topics:
Posted by Dave Eisenmann at 2:34 PM No comments:

More Ways to Inform Parents of How Technology Changes Learning

In a continuing effort to inform parents of how technology is used for learning in school, our  instructional technology coaches in Minnetonka keep exploring new ideas and formats for this communication. In the past I’ve shared about the Minnebytes that have run in our weekly high school newsletter for the past two years with hundreds of examples. At the beginning of this school year, I shared the middle school version of this Minnebytes newsletter for parents and teachers highlighting Minnetonka iPad Integration.

The challenge of grabbing parents' limited attention seems greater than ever. Parents are bombarded with all sorts of messages and information on a daily basis, whether it’s from school, sports, work, or their personal lives. Messages need to be short and to the point, and of course, catchy and attention grabbing. So often it is difficult for parents to understand how technology tools are being used because they remember school before these tools existed and don’t have a background knowledge or understanding of technologies possibilities in education. It is our continued hope that by keeping parents informed of the many ways we are using technology in school for engagement and deeper learning they will better understand its importance and continue to support its use.

In an effort to better reach parents, recently one of our middle school technology instructional coaches, Sara Hunt, has been creating infographics using Infogram. Three examples are included below. In these infographics she focuses on one specific technology tool students use in our one to one iPad program. She explains what it does, how it is used, includes a link to a video about the app, and includes one or more examples of our students or teachers using this tool for instruction.

Related Posts:
Posted by Dave Eisenmann at 11:12 PM No comments:

Join Us at the Annual Minnetonka Summer Institute June 12-14, 2018: Framework in Action

Join Minnetonka teachers, teacher leaders, and administrators at this summer’s Minnetonka Teaching and Learning Framework in Action workshops this summer Tuesday - Thursday, June 12-14, 2018. These mini-institutes are designed to connect one or more of the dimensions of the Minnetonka Teaching and Learning Framework with curriculum, instruction, and assessment.  This year the focus is on five interactive dimensions: Authentic & Real-World Learning, Creativity, Critical Thinking, Personalized Learning, & Use of Technology for Learning. All workshops will be held at the Minnetonka Schools VANTAGE facility in Minnetonka. Each day will feature a keynote presentation by a nationally recognized thought leader followed by application time. Each session will be offered twice: once in the morning and once in the afternoon. Sign up for either here! 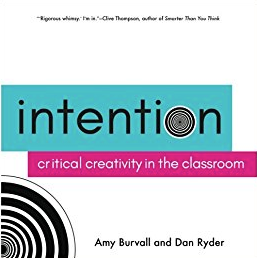 Framework Dimensions: Critical Thinking & Creativity
Transform flights of creative fancy via hashtags and doodles, mashups and portmanteaux, Oreo cookies and LEGO bricks into pathways for students to demonstrate content knowledge, critical thinking, and the problem solving skills that will serve them best no matter what their futures may bring. Structured to maximize takeaways and firsthand experience, learn how explanation, rationale, and intentionality elevate our classrooms into places where students shift from passive riders to active adventurers. Teachers registered by May 1 will receive a copy of his book, Intention: Critical Creativity in the Classroom,  in advance of the workshop. 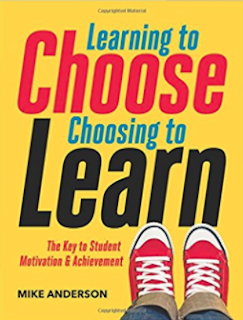 
We know that a one-size-fits-all approach to teaching doesn’t work for most students and that differentiation is the key to meeting the needs of all learners. Yet, in today’s standards-based high-pressured education climate, where students come with a broad range of abilities and needs, it is hard to know where to start. Teachers registered by May 1 will receive a copy of Mike Anderson’s book Learning to Choose, Choosing to Learn: The Key to Student Motivation and Achievement in advance of the workshop. In this active and interactive workshop, educators will:
Student-Centered Classrooms for Today's Student: Engaging All Learners Through Choice, Technology, and Innovative Practices
A.J. Juliani 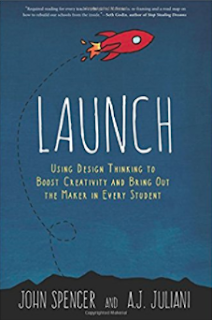 Framework Dimensions: Authentic & Real-World Learning, Personalized Learning, Use of Technology for Learning
Our learners today live in a completely different world than we did 25, 15, or even 10 years ago. Students have access to on demand information with the click of a button on their phones. In today's world, technology is growing exponentially, change is an expected part of our lives, and we have tools that have revolutionized the way we think about teaching and learning.

Yet, on the fundamental level of learning we know that all of this change needs to be channeled for it to have a positive impact on our students and in our classrooms. This session goes into detail on how to build a student-centered classroom that promotes authentic learning experiences for all students. Teachers registered by May 1 will receive the book, Launch: Using Design Thinking to Boost Creativity and Bring Out the Maker in Every Student, in advance of the workshop. Attendees will learn:

Learn more about Minnetonka Schools and Technology Integration:
Posted by Dave Eisenmann at 9:57 AM No comments:

Ray Kurzweil: “The Power of Ideas to Transform the World Is Accelerating”

If you haven't ever heard Ray Kurzweil speak about technology and the future, you should. He is the chief futurist and director of engineering at Google Research. Regardless of whether you agree or not, or perhaps even fear his predictions, he speaks of a radically different future which will quickly be upon us and change our lives, our children and grandchildren, education, and so much more. Years ago at one of the first ed tech conferences I had the opportunity to attend I was able to hear him speak in person. He has a proven track record of making accurate predictions about the future, successfully foretelling many of the technological advances we have experienced over the past few decades. A few weeks ago he spoke at SXSW, and although I was not able to be there in person to hear him, I found the recording of it fascinating and would encourage you to watch it. The video embedded above is actually a pre-interview before his presentation at SXSW. More on both talks with the recordings can be found here.

Despite statements from people like Elon Musk saying that the "single biggest threat to our future is not nuclear weapons but artificial intelligence," Ray Kurzweil says he is an optimist. He explains that technology is making things better: worldwide, poverty and crime are down. Advances in medicine are greatly improving the health and life expectancy of people. He explains that we tend to focus on the negative because technology and communication allow us to learn of bad news instantaneously--he said a century ago we would have never heard of something, 50 years ago we would have read about it the newspaper days after it happened, and now we can watch things happen worldwide in real time. He also mentioned that as humans, evolutionarily we are in tune to be defensive and on alert for bad things, which is another reason we are so aware of many negative news headlines despite evidence that things aren't as bad as they used to be.

Some of Kurzweil's current predictions mentioned in this interview include:

These are just a few of his predictions. It's hard to comprehend exponential change and realize just how soon many of these things are coming and will transform life as we know it! Check out some related posts below:
Posted by Dave Eisenmann at 12:12 PM No comments: