Recently I was interviewed for an article on screen time called The Digital Media Diet: Nutritious Vs. Junk Food Screen Time. In this article, the author creatively uses the food pyramid as an analogy to help us realize there are different categories of entertainment screen time. Just as there are different food groups with varying levels of nutritional value and recommended daily servings, so too are there differing levels of screen time and amounts that should be "consumed." Some foods like fruits and vegetables (or screens used for education, collaboration, creation, and organization) are better for us than other foods such as sugary snacks or junk food (mindless video games or passive movie watching). I love the analogy and think it is a helpful one to point out to both students and adults.

As I stated in the article, I'd rather have my kids socializing with friends through technology or playing multiplayer video games than spending time watching movies or playing video games alone. I realize there are times when screen time won't be productive or seem to have any redeeming value. As parents and educators, we can help kids realize the need to not overindulge in this type of entertainment screen time, just as we work to help them understand why we can't eat candy all the time. We want to raise kids to have a healthy balance in their use of technology, and understanding the different types and values of entertainment screen time is a great skill to teach kids.

It's been over two years since the American Academy of Pediatrics revised their screen time recommendations, encouraging parents to consider the content on the screen itself before deciding whether or not there should be any time limits. The AAP recommends limiting recreational/entertainment screen time to one to two hours per day for children over age two (source). There is no screen time limit for educational content and use. Read more about The Difference Between Educational & Entertainment Screen Time in a previous post.

FYI, the article was written on behalf of Forcefield, a company that created a parenting Apple App to help manage kid's phones. It soon will be available in Android. I plan to try it out in a few months when it will be available as a VPN like Curbi.

Posted by Dave Eisenmann at 7:25 PM No comments:

Sixth grade students in Dan Chies’ STEM class at Minnetonka Middle School West spend one quarter learning about robotics and coding. STEM stands for Science, Technology, Engineering and Math. Approximately four weeks is spent on each topic. For the coding unit, students learn using Apple’s Swift program on their iPads. For robotics, students use LEGO’s NXT robots. The students love STEM class overall, as it is a very hands on, project driven class.
For the robotics unit, Dan first taught students the basics of using the block coding program to move and manipulate the robot. He provides guidance and assistance as needed, but leaves a lot of the troubleshooting and problem solving up to the students. Students work in collaborative groups as they learn and then each of these groups creates a product to showcase their learning as well. One of the final projects is for the students to make a robotic animal, such as a giraffe, turtle or snake that uses its sensors to move or react.  Students also had to submit a video explaining their thinking and each step of coding that took place.
The end project of the "learning the abilities of your bot" portion was to make their robot dance. The dance moves had to be choreographed to the music or words of the music. For example, if the words say "to the left" your robot actually moves to the left. The students each had to program their own robot to work collectively as a whole for 15-30 seconds. As you can see in the video, students had fun with this project and worked hard to get the timing correct.
Then during the second half of STEM class for the quarter, sixth graders learn Swift. The app is very user friendly, with each ‘level’ adding another piece of code language or complexity.  As a final project, students design their own level for Swift, creating a story with a problem to solve, providing the user with hints as well as showing at least two solutions. Dan requires that the code contain more complex moves than moving right or left, such as if...else, loops, etc.
In later grades in Minnetonka, students have further opportunities for hands on, project based classes learning coding and robotics. In seventh grade Tech Ed, students once again get to use LEGO robots, as well as a 3D printer (MakerBot), and design with Google Sketchup. Elective classes in eighth grade include Advanced Robotics using EV3s and a Computer Science class in which students learn Java and HTML. These elective options continue at our high school as well.
Related topics:
Posted by Dave Eisenmann at 9:25 AM No comments:

Simple Tip for Powerful Conversations with Kids: Start with "What if.." vs. "Have you..?" 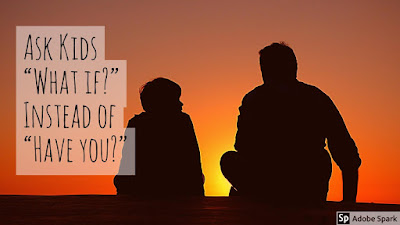 No one likes to get cornered or be interrogated, kids included! When people feel as through they may end up in trouble for answering a question, they may choose to not be as open or honest with their answers. Relationships between a parent and child, teacher and student, coach and athlete, etc. can be challenging enough already, so here's a quick tip to make things a bit easier that I find works well:

Start conversations with "What if..?" instead of "Have you..?"

This simple tip works well for all types of conversations. For example, when talking with kids about technology, consider the differences between asking the following questions:

What would you do if you saw someone being mean to someone online?

Have you ever been mean to someone online?

What would you do if a friend wanted to show you inappropriate pictures online?

Have you ever looked at inappropriate pictures online?

This technique removes the potential fear of a reprimand. I've found it also leads to deeper, more meaningful conversations, too. Variations that might get a bit more personal yet still don't completely corner the person being asked might be "Have you ever seen this happen..?" or "Have any of your friends ever..?" And of course, the questions don't need to be limited to just technology. All sorts of topics are easier to discuss without making them so personal from the get go-- cheating, drugs and alcohol, etc.

Posted by Dave Eisenmann at 8:56 PM No comments: 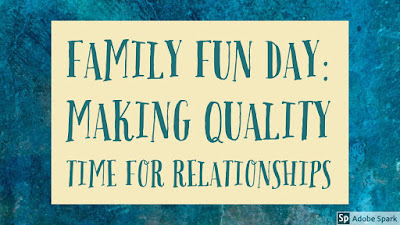 Spending quality time with others is important to build relationships and deepen friendships. It is critical for healthy families. Technology can certainly help strengthen these connections, and of course, it can also distract us from them. Finding a healthy balance and modeling this for today's youth is important. In the past I have written quite a lot about this, such as Be Where Your Feet Are: #RealTime with Those Around You, Tech Free Family Dinners Focused on Gratitude, Five Ways to Raise Digitally Balanced JOMO (Joy of Missing Out) Kids in a FOMO (Fear of Missing Out) World and much more (see links below). Last spring during one of my Parent Webinars with Mathew Meyers, as we were discussing the need to do things with our children that weren't just screen based entertainment, one of the parents submitted this question: "What are some activities to do without screens?"

At first I was pretty surprised by this question, but in discussing it with Mathew afterwards I realized that for many parents, this is a challenge. Much of our lives are busy and scheduled, and by the time we have common free time together, we may be exhausted! What little time many families do have together is often spent with screens on, either collectively watching TV or a movie, gaming, or each on their own device. Sometimes it can be this way in our home, too, but my wife and I continue to make an effort to not have this be the norm. One super fun activity in our home is called "Family Fun Day."

Family Fun Day is a reoccurring monthly appointment on our calendar. It may be shifted due to conflicting events, sports games, etc., but we try hard to have it happen at least once per month. Basically, each of the six members of our family picks an activity for 20 minutes. We draw names to determine who goes first, second, etc. Activities are a surprise and aren't announced until the start. In the span of a couple hours, we spend quality time together doing a variety of activities such as those listed below. It's not always entirely tech free, such as playing Just Dance on Nintendo Wii, but it is a group activity done together. It is a lot of fun, great conversation time, and great memories are made. I'd encourage you to give it a try--let me know if you do and if you have other fun ideas to try!
Related posts:

Posted by Dave Eisenmann at 4:09 PM No comments: