One of the latest media centers in Minnetonka Public Schools to get redone is Scenic Heights Elementary School. The space was first created over two decades ago was in need of updating. So beginning about two years ago, Media Specialist Melinda Barry met with staff, students, parents, district administrators and architects to plan for a makeover. Melinda used the Human Centered Design Process with each of these groups to problem solve the needs and dream about the possibilities. She wrote a grant for funding from four sources (the Minnetonka Foundation, District Innovation funds, Building Capital funds, and the school PTA).


In the grant proposal, Melinda and the team wanted the space to be flexible with furniture that could easily be moved. They envisioned a variety of spaces within the Media Center for quiet work, reading, collaboration, and large group instruction and meetings. The old checkout desk was large and took up a considerable amount of floor space. Old workstations for desktop computers also used up a large amount of square footage. They wanted furniture that was comfortable and a variety of styles, heights, and types.

After two summers of work, the current media center space at Scenic Heights is looking great! As you can see from the photos, new furniture makes the space very colorful and inviting. A variety of furniture styles, from low cushions and stools to high top tables and chairs create a wide range of spaces and areas for students to work. A relocated, smaller checkout desk allowed for more square footage to be reclaimed. A large group teaching area was created that can flex depending upon the size of the group.
At Excelsior Elementary, another media center was remodeled over the past few months. All the carpet was taken out and walls cleared and repainted. A large HDTV was put up for teaching and large group meetings. Windows were replaced that matched the historic architectural style of the original school. Similar to Scenic Heights, the large checkout desk that took up a considerable amount of floor space was removed, relocated, and replaced with a smaller desk. Old workstations for desktop computers were also removed. Media Specialist Erin Carcamo and the staff and students at Excelsior Elementary have enjoyed using their newly remodeled space.

The Media Center at Clear Springs Elementary also received some upgrades over the summer. Most noticeable is the new carpeting and paint. Many of the large desktop computer workstations were removed, freeing up floor space. Media Specialist Tiffany Miley created a number of smaller spaces for students within the media center to read, work, and meet in small groups. Some new portable whiteboards on wheels that can stand alone or be joined together in an accordion-like wall were purchased by The Minnetonka Foundation. These function as a divider of space in the media center as well as can be used in individual classrooms. The Foundation is planning to convert one side of these whiteboards into a Lego wall as part of the Minnetonka maker space initiative called The Hub.

At Minnetonka Middle School East, the media center has received a number of upgrades over the past two summers, similar to the remodeled Minnetonka Middle School West media center. This past summer the old six-foot high bookshelves were removed and replaced with four-foot high bookcases on casters, making the media center space feel more open as well as allowing for flexibility in arrangement. Media Specialist Jane Zins and the students and staff of MME are making great use of the space.

Posted by Dave Eisenmann at 8:33 PM No comments: 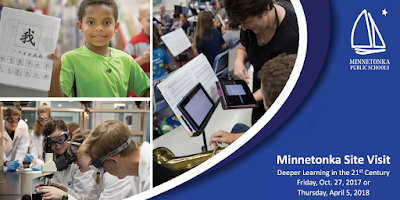 For the past 15 years, thousands of educators have visited Minnetonka Public Schools, including the National School Boards Association which hosted its second visit to Minnetonka in 2014. Come see learning in action, witness proven programs and gather innovative ideas which you can take back to your school! This year's visits are on October 27, 2017 & April 5, 2018. 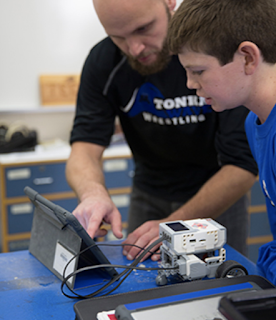 You can choose to start your visit at an elementary school, middle school or our high school. After your tours at a school, you will transition to our District Service Center for lunch and breakout sessions of your choice. Choose from a wide variety of sessions led by Minnetonka staff to learn how things work behind the scenes. Sessions include innovation, the Teaching and Learning Instructional Framework, online learning, coding, Design for Learning, assessment, the curriculum review process, gifted and talented programming, student support services, personalized learning, 1:1 iPads and more. More details on possible sessions from which to choose can be found here. Discover best practices for implementing meaningful instruction that will accelerate learning, have time to ask questions and head back to your own school full of ideas!

Posted by Dave Eisenmann at 8:47 AM No comments:

Our instructional technology staff continue to collect the best practices, favorite ideas and tips for 1:1 integration in all curricular areas from our teachers. They take these and share them with our teachers and parents each week. Many of these middle school "Minnebytes" are device agnostic and in a wide variety of curricular areas. The middle school Minnebytes were started last year by Sara Hunt and will continue this school year, so check back often to see new ideas each week. You can access the high school Minnebytes which I wrote about earlier below as well.

Middle School West principal Dr. Paula Hoff highlights these examples of technology integration in her biweekly newsletters to parents. She does this in the form of a TouchCast video. In this video, she explains how teachers are using the Minnetonka Framework and technology to deepen the learning for their students. Here is a past video in which she highlights technology integration and its connections to the Minnetonka Framework which gives you an idea of how she is using the tool to communicate with parents.

You can learn more about our 1:1 program, iPads, and use of technology for learning in the related posts below:

Posted by Dave Eisenmann at 6:51 PM No comments: 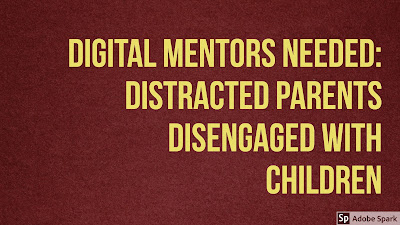 A recent article brought to my attention has me reflecting quite a bit on my ideas around kids' use of smartphones and technology and their ever increasing addictive behaviors and dependence. The article, Yes Smartphones are Destroying a Generation, but Not of Kids by Alexandra Samuel, was written in response to an earlier article in the Atlantic by Jean Twenge entitled, Are Smartphones Destroying a Generation? which stated that smartphones have placed today's youth on the brink of a mental health crisis. In the Atlantic article, Twenge stated that the advent of smartphones has led to today's youth being depressed. But Samuel explains how Twenge cherry-picked her facts. She points out that rather than just looking at a brief one or two year period, when one looks at the data collected over twenty years, it shows that there actually is no noticeable decrease in happiness. She even explains that "Teens report near identical levels of happiness regardless whether they’re on the higher or lower end of social media usage."


What I found most enlightening by Samuel's response to Twenge was the fact that it pointed out at the root cause of smartphone problems might actually be parents themselves. The author explains that because smartphones distract parents, they spend less time with their kids. Furthermore, when their kids interrupt their parents seeking attention, studies have shown that parents respond negatively, seeking to quickly end the interruption so they can get back to what they were doing (such as surfing the Internet, checking Facebook, reading email etc.) Some powerful excerpts from the article worth reading word for word:

"...you know what smartphones and social media are really great at? Tuning out your children... Fellow parents, it’s time for us to consider another possible explanation for why our kids are increasingly disengaged. It’s because we’ve disengaged ourselves; we’re too busy looking down at our screens to look up at our kids."

"My entire experience of parenthood has been lived in the tug-of-war between child and screen; my kids can’t remember a time when they didn’t have to compete with my iPhone in order to get my attention. Like many people, my constant screen interactions are a matter of professional obligation as well as personal taste, so I live life as a constant juggling act between the needs of my children and the distractions of social media."

Samuel goes on to explain that what a parent really needs to do is to become a "digital mentor" for their child, modeling and supporting their use of technology. Again, an excerpt:


Mentoring your kids means letting go of a one-size-fits-all approach to kids’ tech use, and thinking instead about which specific online activities are enriching (or impoverishing) for your specific child. Mentoring means talking regularly with your kids about how they can use the Internet responsibly and joyfully, instead of slamming on the brakes. Mentor parents recognize that their kids need digital skills if they’re going to thrive in a digital world, so they invest in tech classes and coding camps. And of course, mentor parents embrace technology in their own lives—but thoughtfully, so they can offer guidance on the human (if not the technical) aspects of life online.

I have written about technology distractions in the past which I have observed in both my own efforts to limit distractions as well as those of others. I've spoken about personal struggles to spend time with my own kids rather than being distracted by technology. I love the idea of parents as digital mentors--it's not new. I first heard about it from Devorah Heitner at the 2015 DigCit Conference in Connecticut. Check out her Digital Citizenship Mentorship Manifesto.