Minnetonka Screening "Like" Documentary About the Impact of Social Media

In our continued efforts to help our children (and ourselves) practice a healthy balance with our use of technology, Minnetonka Schools will be hosting a parent screening of a new documentary about the impact of social media on our lives called Like on November 13, January 27 and 31. (If you're in the area you can RSVP here and claim a free ticket). All students in grades 6-12 will also see the film this year as part of their health curriculum.

I first learned about the film early this summer and previewed it with one of our principals. Then I pulled together a group of about 30 others to see it (principals, health teachers, counselors, media specialists, administrators and others). They confirmed its value and we discussed how to have our students and parents see it. Our health teachers liked the direct ties into their curriculum on relationships and the role of technology in our lives. Guidance counselors and administrators liked its messages about the impact of social media. Everyone agreed that it could be a helpful way to further educate both our students and their families and promote a healthier relationship with personal technology.

Pros
Overall the film is really well done. It has a nice balance of interviews with students as well as experts. The film relays information about the purposeful design of social media apps to get us to use them more, a message that the Center for Humane Technology is working to inform the greater public about. This is an organization that I have been following and written about previously. The film includes interviews with Max Stossel, Head of Education & Content. It ends with an updated version of the Panda is Dancing short clip that Max stars in from a few years ago. The film also interviews the co-founder of the "Like" button on Facebook, Leah Pearlman, and discusses the effects of this numeric value on our interactions.

The film does a great job of educating the viewer on these important topics. The film not only addresses some negative effects of social media and phone use but also highlights positives, as well as suggests steps to take to regain a balanced and more healthy use. This is something other films I've seen haven't done and therefore we've avoided showing our community because they basically were too fear mongering and would not help bring change. 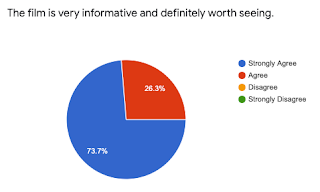 Post screening surveys were very positive about the film. As shown in the chart, 100% of parents agreed that the film was informative and worth seeing. Parents also listed many things they had learned from the film that they plan to implement.


Cons
Unfortunately one part of the film that is not helpful is a short, misleading 3 minute section on "Technology in the Classroom." They interview the principal of a middle school that is going phone free with expensive magnetic locking cell phone pouches for kids to carry around. They quote the often cited myth that Silicon Valley executives send their kids to tech free schools--including Steve Jobs--whose children were in school prior to the iPhone and iPads. Yes, a small percentage do, but relative to the thousands of executives in SV it's a very small number. Be sure to read Carl Hooker's blog post related to this about Technology Fear Therapy for Parents and Schools. At least at the end of these three minutes they acknowledge that creativity and intuition can happen "in conjunction with machines." When I spoke with Scilla Andreen, the CEO and Co-Founder of IndieFlix, I encouraged her to cut this section out. Any screening of LIKE should point out these misleading blanket statements and myths.

More info
During the screening, I paused the film three times and gave the attendees a few minutes for discussion with others around them on some questions I posted on the screen. At the end I also shared a number of tips and ideas from my own family to work toward a healthy relationship with social media, personal technology, and entertainment screen time. You can watch a nearly identical recording of that presentation here: My 20 Minute Ed Talk: Screen Time & Student Well-being

As a follow up to our screenings of LIKE, we are holding a Social Media & Parenting Panel Discussion in Minnetonka on March 12.

Posted by Dave Eisenmann at 9:04 AM